The singer Adebayo Adeleke, better known by his stage name B-Red, who is the son of Ademola Ademola, acquired a house of N120 million.

The singer of HKN B-Red has just acquired a house of N120 million in Lagos, the singer revealed via Twitter.

While he was posting a photo with many keys on his doorstep, the singer wrote: 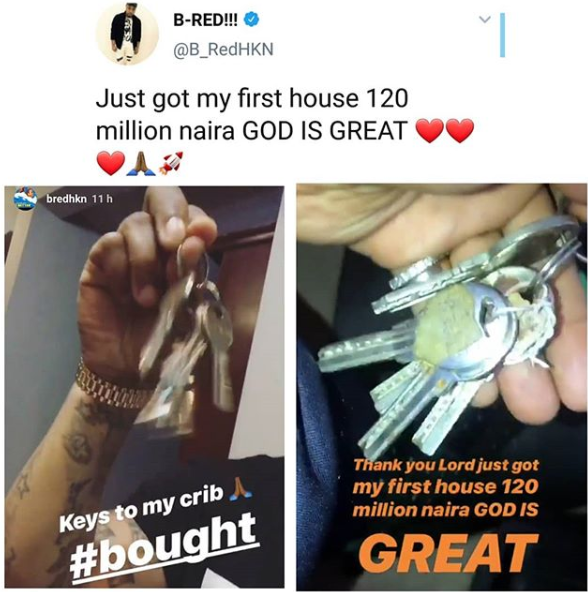 While reacting to the new purchase on social networks, some fans scolded him for declaring the price of the house, which some believe may have been exaggerated, as presumably by most celebrities.

READ ALSO: Ikorodu Boys Reveal Davido Didn’t Give Them The N1M He Promised

Here are some reactions.

“Some have even said that the keys he showed on social networks were not close to a house worth at least 120 million dollars.

“Those keys don’t seem to be close to 120 million … They look like the keys to Ma House in Mbaise.

“Fantastic, missing, however, the image of the royal house, if you have to use dental floss, use it completely.

“We think Davido is running:

“It’s better than buying Car Flit and still being a tenant … But why mention the amount?

“Oga, show us a picture of the house, this required:

“Lol and all you can show is a lot of code? How about a picture of the house?

“We are not sure that B-Red is married, however:

“Congratulations, husband, God bless our new home, thank you all for your wishes.